Skip to content
Home » Why Is The Cost Of Living Rising and What Is National Debt?

What Is National Debt?

National debt – also known as public, government, or sovereign debt is money owed by a central government to its creditors.

Debt is calculated as the sum of the following liability categories (as applicable): currency and deposits; debt securities, loans; insurance, pensions and standardised guarantee schemes, and other accounts payable. oecd.org

The U.S. takes the number one spot with the highest national debt owing an estimated $30.9 trillion. China follows in second place with 13 trillion, followed by the U.K. with 9.02 trillion. France owes 7.32 trillion and Germany comes in fifth at around 5.47 trillion dollars. (See the link below for debt clock and up to the minute figures).

Gross domestic product (GDP) is the income earned by a nation through the production of goods and services. It’s used to indicate national economic activity and is often combined with the national debt as a more realistic way to measure debt.

The graph from the Organisation for Economic Co-operation and Development OECD shows the General  National Debt by country measured as a percentage of GDP. 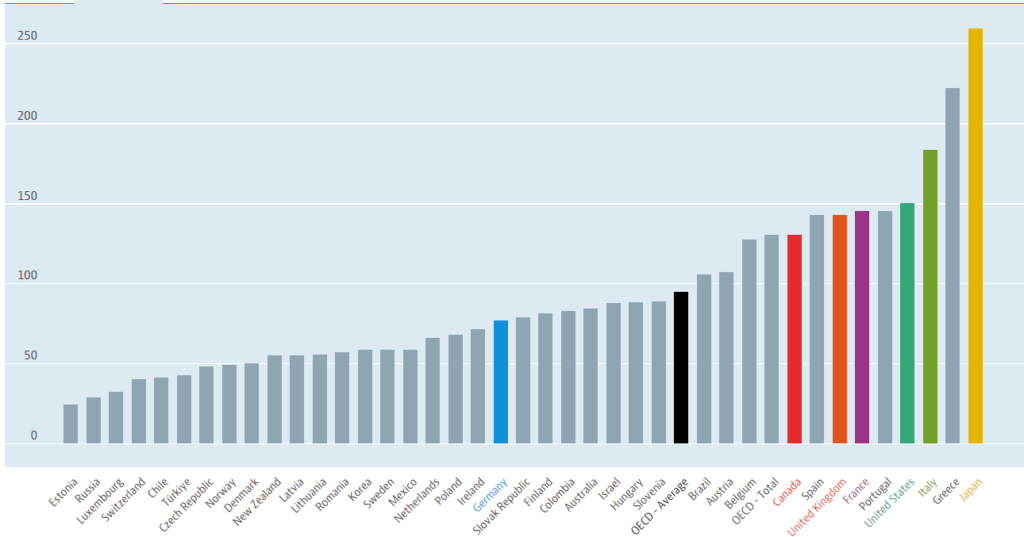 With GDP taken into consideration Japan, Greece, Italy, the U.S. and Portugal now take the top five spots with France just out of the top 5 in the 6th position, the U.K just behind them in 7th and Germany down in the 22nd position.

What Countries Have The Lowest National Debt?

What About The U.S. and China

The U.S. and China are the two main global economic powerhouses but the U.S. is in debt to China by an estimated 981 billion dollars (Rounding up that’s a TRILLION). If China began dumping U.S. debt the result would be an increase in costs for U.S. businesses, consumers and the U.S. government all of which could damage attempts at economic recovery for the U.S.

The link below shows live debt clocks for some of the major economic countries.

Inflation – What Is It And Why You Should Be Worried

Just reference:MakeMeClever.com – thank you for sharing our Cleverness.

Be part of our Clever Community – share your Cleverness with us – We love to hear from you.