Skip to content
Home » Is Supermarket Meat Killing You? Cancer and E250

How Fresh Is Fresh?

According to the Daily Mail:

‘Fresh’ can be used to describe food that has been heat-treated, part frozen, industrially or chemically altered and stored for weeks on end…[Including} New Zealand lamb that’s been dead for nearly two months. 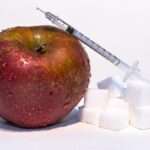 Not only meat may be injected with chemicals.

That pretty pink colour of your fine slice of ham isn’t natural. It’s created by sodium nitrite (E250) which is injected into your processed meat. Supermarket meat is so old its natural colour is dull grey. Big chains have to add flavour and colouring to make your old meat ‘look’ edible again. After all, who wants to eat meat that looks like it’s well over a month old?

The only problem is that sodium nitrite is linked to Colorectal Cancer (CRC), or bowel cancer – the 2nd most deadly cancer in developed countries.

Nitrites are used to improve the flavour and aroma of the meat as well as give it the red-pinkish look of fresh meat we all look for. If it was not for E250 your meat would be the grey colour it should be. It is also claimed to prevent the risk of bacterial contamination of the cured meat including Botulism.

The UK Food Guide states the use of Nitrite (E250) as:

Sodium Nitrite (NaNO2) is a food additive that gives cured meats, such as ham, bacon, hot dogs, frankfurters, smoked fish and corned beef, their characteristic red colour and flavour, it inhibits the growth of bacterial spores that cause Botulism…

Oncology News states that: “Colorectal cancer (CRC) is the third most common cancer in men and the second in women worldwide. More than half of the cases occur in more developed countries. The consumption of red meat (beef, pork, lamb, veal, mutton) is high in developed countries and accumulated evidence until today demonstrated a convincing association between the intake of red meat and especially processed meat and CRC risk”. Source: https://www.ncbi.nlm.nih.gov/pmc/articles/PMC4698595/

Although the preservative E250 is already banned in Norway, Sweden, Canada and, parts of Germany the European Commission shied away from an EU ban and colorectal cancer still retains its position as the 2nd most deadly cancer in ‘developed’ countries (coincidentally, the countries where the most processed foods are consumed).

One of the reasons for the continued use of Sodium Nitrite in the EU was that shoppers will not want to buy the more natural ‘greyish coloured meat’ – Or was it because of big company financing and money?

We suggest a ‘Clever notice’ should be added to processed meat similar to those on cigarette packets:

Warning: Consuming this meat will cause cancer!

The Meaning of Life – How To Find Yours

Daily Mail: Just how fresh is fresh food at the supermarket? Read this investigation (External Link)

Feel FREE to share this Cleverness. Just reference MakeMeClever.com Thanks!

FREE promotion for your website, product or service just go to our Clever Contributor page or email us at:info@makemeclever.com, We love to hear from you.

Posted in Life, Sale of goods.